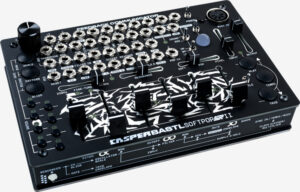 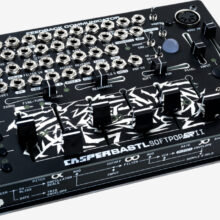 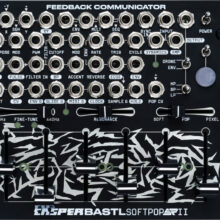 Softpop SP2 is a radical subtractive synth under the influence of unconventional digital control. It’s a rare beast that excels at both melody and noise in equal measure.
SP2’s favorite sounds include bassline bangers, angelic chord progressions, distorted beats, and water droplets. Softpop also has an external input with enough gain and saturation to process any sound thru the filter and VCA.

The heart of SP2 is an analog, modular synth replete with lush tones and a chaotic disposition. Its brain is a complex digital sequencer and quantizer that brings (some) order to the chaos. The analog heart and the digital brain support each other while also pushing their behaviors out of normal routines in surprising ways.

SP2’s sequencer is built around simple 8-step loops of notes, gates, and slides called PATTERNS. These PATTERNS (8 per BANK) can be played and chained in any order (and in real-time) to create longer sequences. Softpop’s sequencer expands on this classic format by adding 8 SCALES of user-definable quantization, 8 playback modes, and 8 performance FX, all of which can be independently chained and looped!

Use the SCALE chaining to build chord progressions or reach for playback modes to browse the 8 steps in different ways. Add randomness and modulation to the pitch with the PITCH MOD fader and transpose the sequence with the PITCH fader. Temporary FX can be played on the fly to help you build transitions or looped for yet another degree of sequenced complexity.

Plug any external audio signal into the SP2 to radically transform its sound with the built-in filter, VCA, and overdrive. Create stepped modulation with the sequencer and auto-wah style effects with the input-tracking envelope follower. Randomize it all with the sample & hold and use the 37-point patchbay to dive into the modulation madness.

Softpop has a unique voice that reaches beyond classic subtractive timbres. It is playable by MIDI, and for all the sequencing fun, it features a quantizer with 8 user-definable SCALEs that can also be set by MIDI. SP2’s analog triangle core VCO has a built-in automatic digital tuning feature so that your melodies will be in tune in all octaves in just a few seconds.

Eurorack compatibility, analog sync, and MIDI connectivity make the SP2 a mighty collaborator when combined with other instruments. USB power makes Softpop ideal for battery-powered setups, while its immediate fader interface is superbly suited for performance situations. Like any real instrument, Softpop provides a lot of depth accessible by button combinations. These are described on the enclosure so you won’t get sucked into your phone while searching for the manual.

Softpop is the culmination of a near decade-long creative partnership between Casper Electronics and Bastl Instruments and brings together the strengths and quirky design stylings of lead engineers Peter Edwards and Václav Peloušek. We feel it’s our best work to date and a product of pure passion for innovative synthesis, music-making, and experimentation.

There are a few things very unique to Softpop that you will not find anywhere else. For instance the super pingable filter with the POP cross-modulation, the quantizer chaining, the playback modes, and their chaining or the MIDI-controlled quantizer.

The Softpop SP2 DNA comes from the original softPop, a unique art object inspired by a cult-classic synth called the Benjolin designed by Dutch synth genius Rob Hordijk. The primary locus of inspiration from the Benjolin was the intricate interplay of the controls that create sonic behaviors more akin to a creature you can befriend than a studio tool you can control.

What’s in the box